After initially falling early in the week, equity markets crawled back into positive territory by the end of week despite a weaker than expected jobs report on Friday.  The US economy added 194,000 jobs in September, which dropped the unemployment rate to 4.8%.  However, analysts were expecting 500,000 jobs to have been added, and the unemployment rate dropping was partially attributable to a decline in labor participation, so the news was disappointing[1]. The S&P 500 (a proxy for US large-cap stocks) ended up rising 0.8% for the week while the MSCI ACWI index (a proxy for global stocks) gained 0.7%[2].

As equity market volatility has risen somewhat in the past two months, investors may not be paying as much attention to bond markets. Historically, investors have relied upon bonds to be a source of income and to help dampen overall portfolio volatility because of their lack of correlation to stocks. However, with interest rates low, inflation picking up, and the US Federal Reserve contemplating raising rates in the near future, many bond securities have lost value recently (see iShares exchange traded funds representing a variety of bond markets since September 20 below). As a result, investors may need to rethink the role that bonds play in their portfolios if we enter a prolonged rising rate environment. 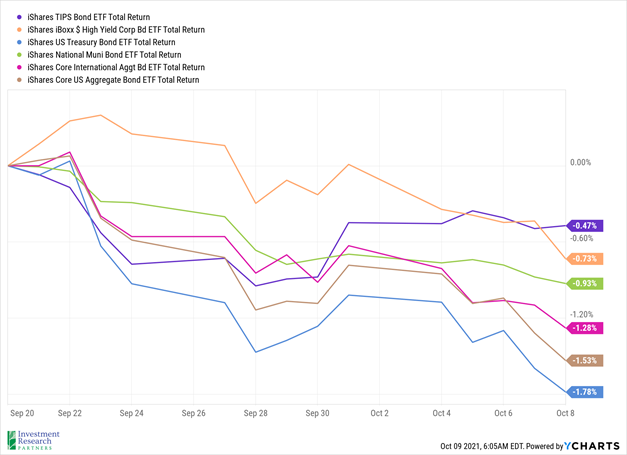 Contact An Advisor
Past performance may not be representative of future results.  All investments are subject to loss.  Forecasts regarding the market or economy are subject to a wide range of possible outcomes.  The views presented in this market update may prove to be inaccurate for a variety of factors.  These views are as of the date listed above and are subject to change based on changes in fundamental economic or market-related data.  Please contact your Financial Advisor in order to complete an updated risk assessment to ensure that your investment allocation is appropriate.
3744