Key Events: The Fed is serious about inflation

The market seems to be grasping for any hope that the Fed will pivot towards a more accommodating path. After the stock market roared back from a dismal third quarter on Monday and Tuesday, a couple of calm days followed. However, the market’s hopes ran head-on into some good economic news on Friday. Yes, you read that right – good news is bad news right now, because it means the Fed will stick to its plans to raise interest rates.

The offending data was the jobs report, which showed a labor market that remains strong. One of the big drawbacks of the inflation fight is that the economy must slow, which means unemployment is likely to go up. This strong employment report gives the Fed license to remain on its tightening trajectory, contrary to market hopes.

The stock market launched into the 4th quarter with a 4.7% gain on Monday and Tuesday. This was one of the best 1% of all two-day gains since January of 2022 [1]. A couple of calm days followed, but we had more fireworks on Friday, as the “good therefore bad” jobs data cause stocks to sell off significantly. US large cap stocks gained 1.6% for the week, with small and international stocks performing better. Bonds gained as well, with the Bloomberg Aggregate bond index up 0.2% and high-yield bonds up 1.9%.

Outlook: Expect continued volatility while the markets seek to find a bottom

We’ve been talking about this for a while, but don’t expect volatility to recede just yet. As can be seen in the graphic below, from Visual Capitalist, rates have risen faster than at any other time in recent history. Volatility is likely to remain while the Fed remains aggressive. Remember, though, that fantastic returns often follow difficult periods. The ten best months for stocks in the last 20 years include April 2020, the first month after the pandemic, and March and April 2009, the first two months after the Global Financial Crisis ended. 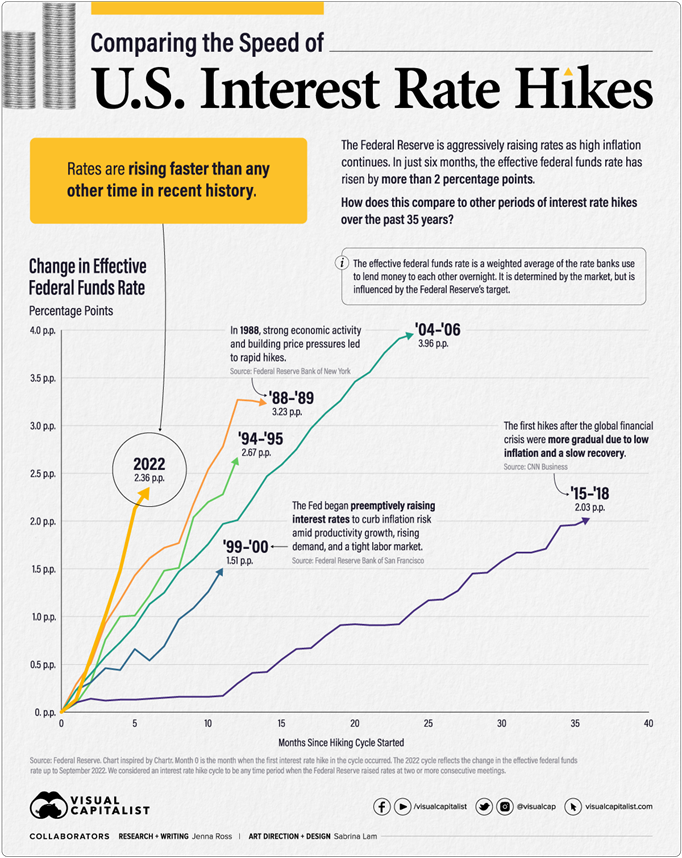 Contact An Advisor
Past performance may not be representative of future results.  All investments are subject to loss.  Forecasts regarding the market or economy are subject to a wide range of possible outcomes.  The views presented in this market update may prove to be inaccurate for a variety of factors.  These views are as of the date listed above and are subject to change based on changes in fundamental economic or market-related data.  Please contact your Financial Advisor in order to complete an updated risk assessment to ensure that your investment allocation is appropriate.
5445