In a week full of headlines, investors found more positive news than negative and equity markets responded by rallying across the board last week. The S&P 500 index, a proxy for large-cap US stocks, was up over six percent for the week, marking its best weekly return since November of 2020. The MSCI ACWI index, a proxy for large-cap global stocks, almost kept pace, gaining over five percent.[1] 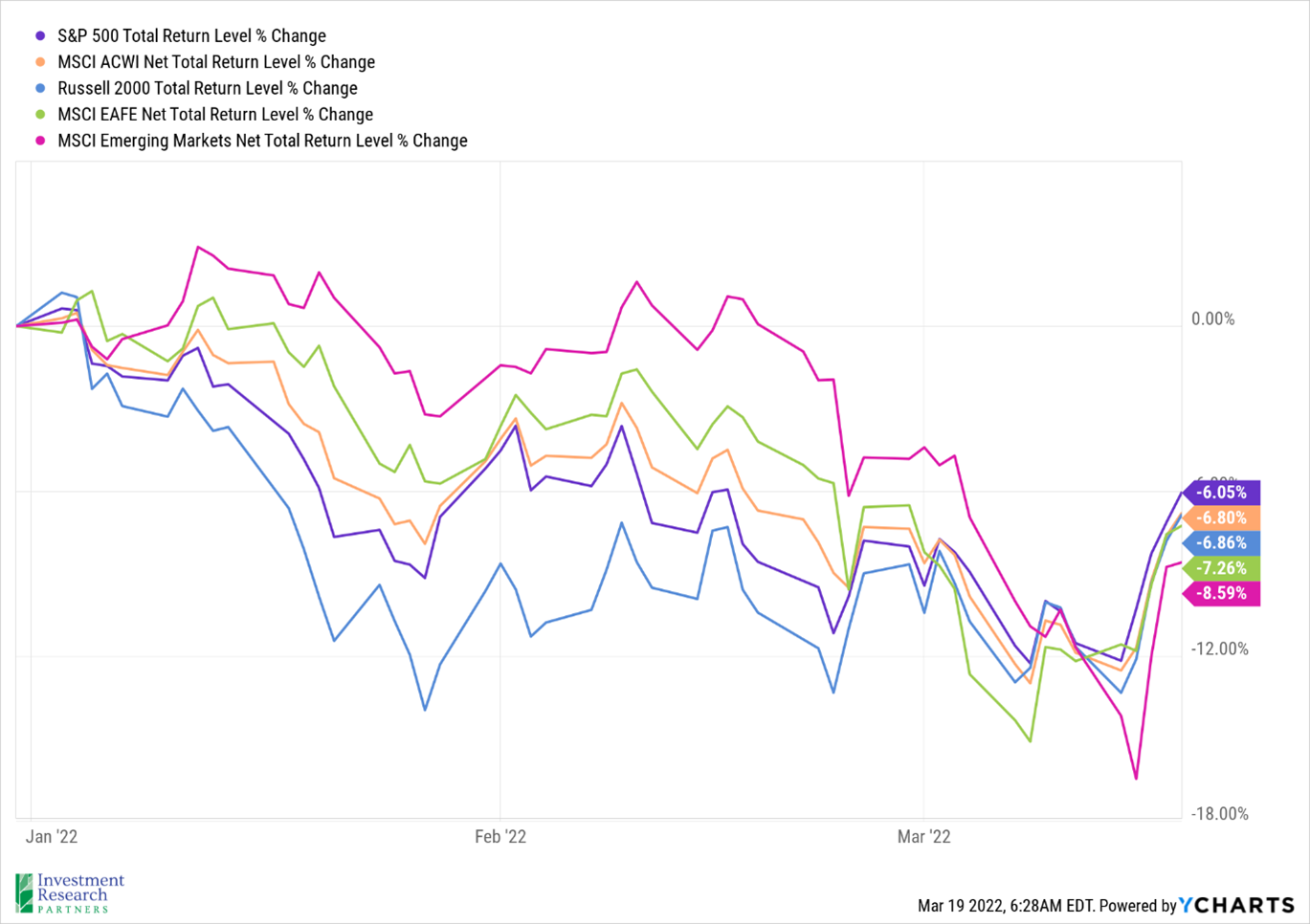 The Federal Reserve followed through on its prior messaging Wednesday, announcing a 25-basis point interest rate hike, the first such hike since 2018. While Fed Chairman Powell insinuated in his press conference following the announcement that they may continue raising rates throughout the remainder of the year, which would typically be received as a negative for markets, investors seemed to focus more on his opinion that the chance of recession this year is not elevated.[2]

China was also in the news this week. In the face of Chinese equities lagging other regional markets dramatically since the government cracked down on a variety of industries last year, officials announced an easing of regulation and more support for businesses going forward. Chinese equities rallied after the news.[3]

In addition, President Biden and Chinese President Xi met virtually late in the week to discuss the situation in Ukraine. Based on reports, President Biden sought to solicit Xi’s help in deescalating the conflict in Ukraine, warning his counterpart of “implications and consequences” if they back Russia in the invasion.[4]

Lastly, the humanitarian catastrophe worsened in Ukraine as the Russian military continued to pound Kyiv and Mariupol. The Pentagon’s Defense Intelligence Agency offered the grim assessment that the longer the war continues, the higher the odds that President Putin will resort to using nuclear weapons.[5]

Contact An Advisor
Past performance may not be representative of future results.  All investments are subject to loss.  Forecasts regarding the market or economy are subject to a wide range of possible outcomes.  The views presented in this market update may prove to be inaccurate for a variety of factors.  These views are as of the date listed above and are subject to change based on changes in fundamental economic or market-related data.  Please contact your Financial Advisor in order to complete an updated risk assessment to ensure that your investment allocation is appropriate.
4519