After a tumultuous beginning of June for markets, investors hoping that a Federal Reserve (Fed) meeting and rate hike would calm markets were sorely disappointed last week.  It was not for lack of effort on the Fed’s part, as they raised rates by 75 bps (0.75%) in an effort to address persistently high inflation (largest rate hike since 1994).  Equity markets responded with a positive day on Wednesday when the Fed announced their decision, but several other down days left equity markets deeply in the red for the week.  The S&P 500 (a proxy for large-cap US stocks) and the MSCI ACWI (a proxy for large-cap global stocks) ended the week down 5.8 percent and 5.7 percent, respectively.[1]

In a sign that higher rates are beginning to be felt by US households, mortgage applications are falling as mortgage rates continue to rise.[2] First time home buyers are having an especially difficult time, and many have been priced out of the market as the average 30-year mortgage rate approaches 6 percent. In addition, credit card rates have also jumped significantly of late (see below). [3] The combination of rising prices and higher financing costs is challenging for households and businesses alike. Only time will tell whether the Fed is able to raise rates enough to curb inflation without tipping the economy into recession. 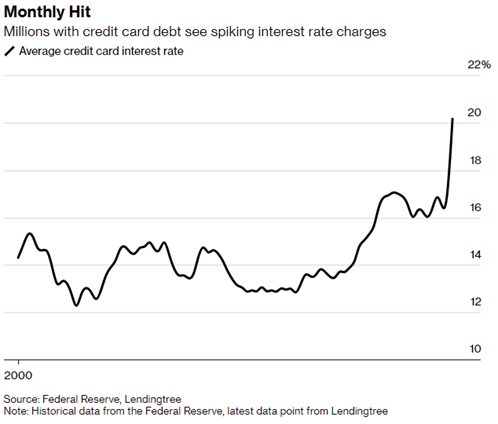 Contact An Advisor
Past performance may not be representative of future results.  All investments are subject to loss.  Forecasts regarding the market or economy are subject to a wide range of possible outcomes.  The views presented in this market update may prove to be inaccurate for a variety of factors.  These views are as of the date listed above and are subject to change based on changes in fundamental economic or market-related data.  Please contact your Financial Advisor in order to complete an updated risk assessment to ensure that your investment allocation is appropriate.
4878