On Sunday, President Trump signed into law an agreement for a long-awaited stimulus bill aimed at mitigating the economic impact of the COVID-19 pandemic.  In addition, the President requested a vote in Congress to increase the direct payments to individuals from $600 to $2,000.  As of this writing, it is unclear whether there is enough support to pass the increased amount[1].

The new bill is roughly half the size of the $2 trillion CARES Act signed in March, though still one of the largest in US history.  While the direct payments and enhanced unemployment benefits are less (at least currently) than what was originally included in the CARES Act, the S&P 500 opened higher on Monday as investors applauded a bill finally being passed.

In addition to the positive news from Washington, the biggest vaccine campaign in history is well underway.  Nearly 2 million vaccines have been administered in the US already, nearly half of the 4.4 million vaccines that have been given globally.  While the US is off to a quick start, delivering billions of shots globally remains a formidable logistical challenge[2]. 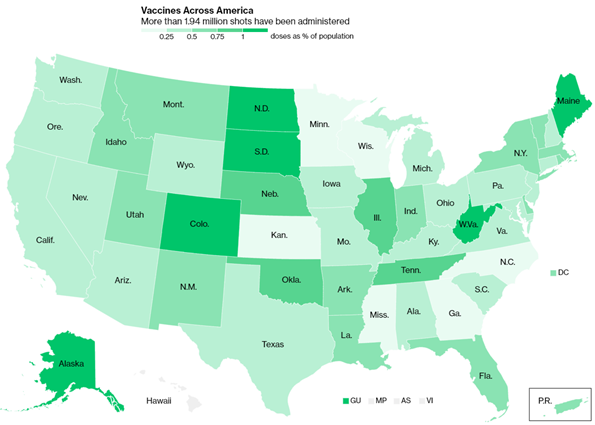