Most stock indexes trended higher last week, many to near all-time highs, as the US Labor Department reported payrolls increased by 943,000 last month. The increase exceeded economist expectations and drove the unemployment rate down to 5.4%[1]. In addition, average hourly wages also increased year-over-year, as many employers have increased pay in an effort to attract workers. 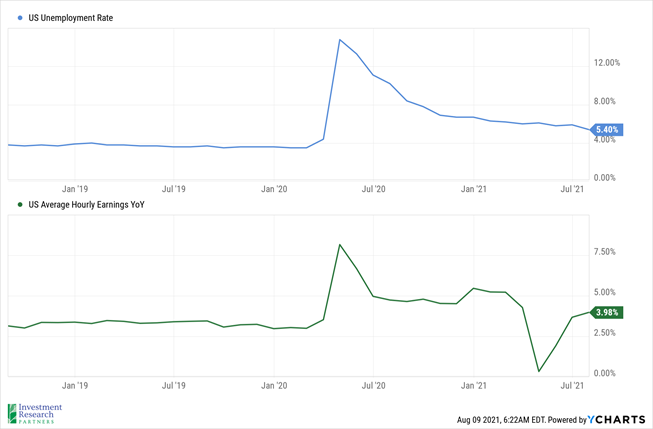 However, there are parts of the market that did not fare as well last week. Precious metals, such as gold and silver retreated last week as many believe the stronger employment data and recent upticks in inflation may force the US Federal Reserve to tighten its massive monetary stimulus sooner rather than later. Both crude oil and energy stocks retreated, as well, albeit for different reasons. The increase in coronavirus cases due to the delta strain appears to have investors in those markets concerned that the virus could reduce future demand[2].

Contact An Advisor
Past performance may not be representative of future results.  All investments are subject to loss.  Forecasts regarding the market or economy are subject to a wide range of possible outcomes.  The views presented in this market update may prove to be inaccurate for a variety of factors.  These views are as of the date listed above and are subject to change based on changes in fundamental economic or market-related data.  Please contact your Financial Advisor in order to complete an updated risk assessment to ensure that your investment allocation is appropriate.
3586