The first half of 2020 has seen many unprecedented events, both in terms of the impact on society from the COVID-19 pandemic as well as the resulting extreme movements in risk assets.  The year began on a relatively optimistic tone as US equity markets marched toward all-time highs in February, aided by tailwinds from stable economic conditions, an accommodative Federal Reserve, and substantive progress on the US-China trade dispute.  Almost simultaneously in late February and March, the pandemic and an energy price collapse led to a sharp decline in risk assets globally, and the stay-at-home orders across much of the developed world froze economic activity in April.  These were both exogenous events that were difficult to anticipate, and investors have spent much of the last few months attempting to fully understand their future impact on households, businesses, and governments.

While the S&P 500 is down only 3%[1] as of June 30, the dispersion of outcomes across sectors has been extreme in 2020.  Previously we outlined the “haves” and “have nots” of the current environment.  In other words, those companies that were best positioned to operate or thrive during the pandemic, and those that will struggle or fail.  As equities have recovered significantly from the near-term lows set on March 23, the lion’s share of the gains, both in terms of corporate earnings and investor interest, have accrued to the “haves”. 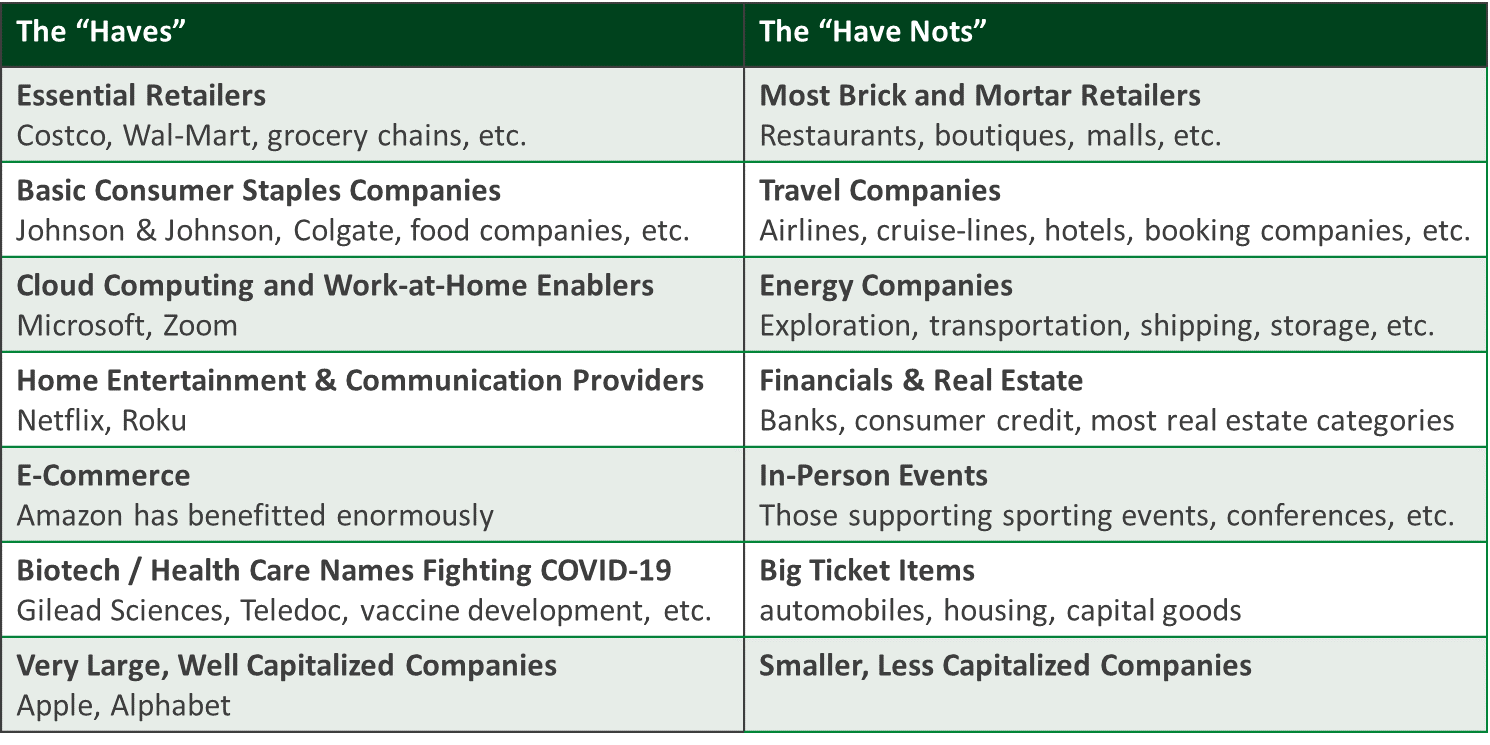 We began 2020 by highlighting five key themes that we expected to impact risk assets during the year.  Not only has the COVID-19 virus overtaken these themes in relevancy and influence in 2020, but it also simultaneously impacts aspects of each:

Earlier this year, the field of potential Democratic presidential candidates was quite large, with diverse views toward taxation and regulation.  Now that Joe Biden is the party’s nominee, we have more clarity as to what to expect and we anticipate a modest rise in corporate taxes should he win the presidency.  However, the impact on corporate earnings may be offset by additional large measures of fiscal stimulus in the form of direct payments or infrastructure spending.  We will continue to monitor developments as we move closer to November.

The virus has also overshadowed a few very significant geopolitical issues which are still simmering in the background.  We began the year with the US and China signing a “Phase 1” agreement on trade policy, but the virus began being reported in China shortly thereafter.  The agreement was a step in the right direction, but it was criticized for being light on details.  The trade talks on a future agreement seem to have largely been put on hold during the pandemic and will likely continue to be paused until after the US presidential election.  Additionally, the oil price war led by Saudi Arabia and Russia that amplified selling of risk assets in the first quarter remains in the background. These issues have seemingly taken a backseat as nations respond to the pandemic, but we are not discounting the risk that they take center stage again in 2020 or 2021.

The US Federal Reserve has two primary goals: to maintain stable prices and full employment.  Prior to the pandemic, Fed Chair, Jerome Powell, had already been communicating an accommodative stance toward monetary policy in the US as economic growth was beginning to show signs of slowing since as early as 2018.  Since the pandemic took hold and plunged the US into recession, the Fed’s response has been unprecedented in terms of both its scale as well as its scope as new forms of monetary support, such as direct purchases of corporate bonds, have been initiated.  We view monetary policy as a tailwind for risk assets in the short-to-intermediate term, though the extreme amount of money printing today may cause distortions in the future in the form of inflation or currency devaluation.

The stay-at-home orders that rolled across the US in March and April led to an unprecedented freeze in activity as nearly every traditional measure of economic health reported the largest declines in recorded history during the quarter.  While activity has begun to resume and leading economic indicators have trended upward, this has been from a very low point, so some bounce is expected.  For the second half of 2020, it will be important to track the pace of the recovery in metrics such as employment and household spending in order to determine if there is a sustainable trend toward growth or simply a resumption of modest activity in a muddle-through economy.

The May and June employment reports showed encouraging signs of workers being rehired, and the weekly applications for initial jobless claims have been trending lower for the past few months.    We will continue to monitor economic data and financial markets closely if workers experience an extended period of unemployment. 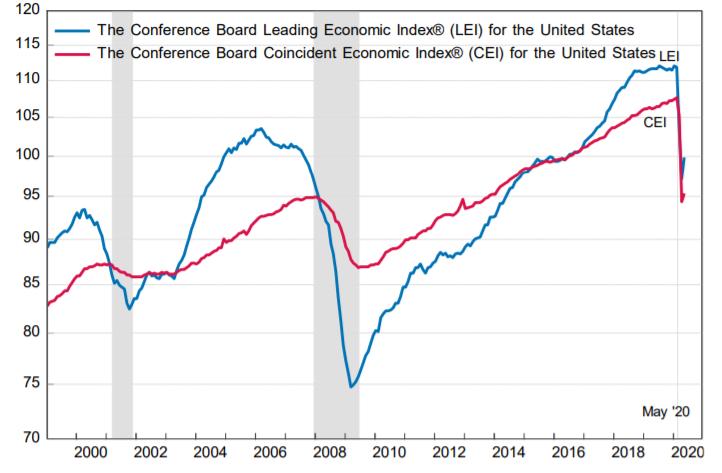 Source: The Conference Board

The consensus estimate from analysts for S&P 500 earnings in the second quarter is for a decline of 44% from Q2 2019, which would mark one of the largest quarterly declines in history [1].  Based on expected earnings over the next 12 months, the S&P 500 is currently trading at 22x versus the five- and ten-year averages of 17x and 15x, respectively.  It seems clear that investors are looking beyond the next twelve months to price the index, as analysts expect 2021 earnings to regain 2019 levels (approximately $163) and 2022 to rise 10-15% from there to +$180.  This would imply that investors buying the S&P 500 index today are paying roughly 19x for 2020 earnings and 17-18x 2022 earnings, which does not leave much room for error.

For the second half of 2020 and beyond, we have added a sixth key theme:

This theme would typically fall under considerations related to economic growth, but in the current environment, we believe that it will be critically important to the strength of the recovery.  The confidence of households in their future economic prospects drives their level of current consumption on discretionary spending like leisure activities (e.g., restaurants, vacations), but more importantly, confidence in the future is typically a main consideration when making significant decisions such as getting married, purchasing a home, and having children, and these choices tend to have continual effects on economic growth as they require ongoing spending.

In a survey taken by Bloomberg News of 2,200 US adults, individuals are expressing less desire to spend on material things like appliances and clothes, and instead are choosing to stockpile their pantries and add to savings accounts.[2]  The University of Michigan also conducts a monthly survey of US households that seeks to understand their attitudes toward their personal finances as well as current and expected future economic conditions.  The survey has begun to trend upward in May and June after hitting the lowest point since the wake of the 2008-2009 financial crisis in April, but the headline survey result as well as the underlying Index of Consumer Expectations are both below long-term averages.  We are closely watching consumer sentiment data for any indication of a longer-term psychological shift by households toward savings versus consumption.