Risk assets rose sharply in July as investors digested US economic and corporate earnings data for the second quarter 2020 and tracked the progress of a potential new stimulus bill from Washington.  The S&P 500 returned 5.6% during the month, led by the consumer discretionary sector, which is now significantly composed of e-commerce companies like Amazon, which returned 9.0% during the month.  Large technology companies like Apple, Alphabet, and Microsoft also outperformed earnings expectations and moved higher during the month.  Following July, the S&P 500 is now just 3% below the all-time closing high of 3,386 set in mid-February.

The COVID-19 pandemic has been a significant source of influence across global markets and economies during 2020.  As the world anxiously awaits a vaccine from one of the dozens of companies and institutions racing to find a cure, confirmed cases in the US significantly increased during the summer as stay-at-home orders and business closures were relaxed across the country.  The chart below highlights that the rolling average of new cases began to trend modestly lower later in July, which may be an encouraging sign that this potential second wave and abating.  The true test for the United States will be the reopening of schools, colleges, and universities in a few weeks.  Successful reopening with containment of any infections will be a significant step toward normalcy and greater resumption of economic activity. However, another semester of closures and remote learning could create havoc for parents attempting to balance employment and their children’s education, along with the college and university system which employees thousands of people and relies on room, board, and auxiliary revenue. 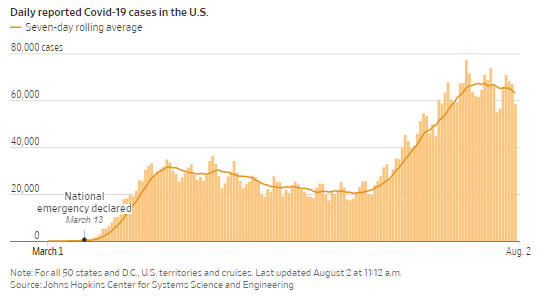 As of July 31, more than three hundred companies in the S&P 500 index have reported results for the second quarter.  While the quarter’s numbers have been abysmal, markets are reacting favorably to the fact that most companies have outperformed analysts’ consensus expectations.  To date, 84% of companies that have reported results have beat analysts’ expectations for earnings, and 69% have outperformed revenue expectations.  Outperforming revenue expectations is particularly encouraging given that this number is much less subject to management reporting discretion, and is a more-direct indication of a company’s customer activity.  When the quarter began, analysts’ consensus expectations for S&P 500 earnings blended to a year-over-year decline of -44%.  Encouragingly, that number now stands at -36% when blended actual company results with analysts’ expectations for those companies that have not yet reported.  Sectors like healthcare, technology and e-commerce companies have performed well relative to expectations during the pandemic. 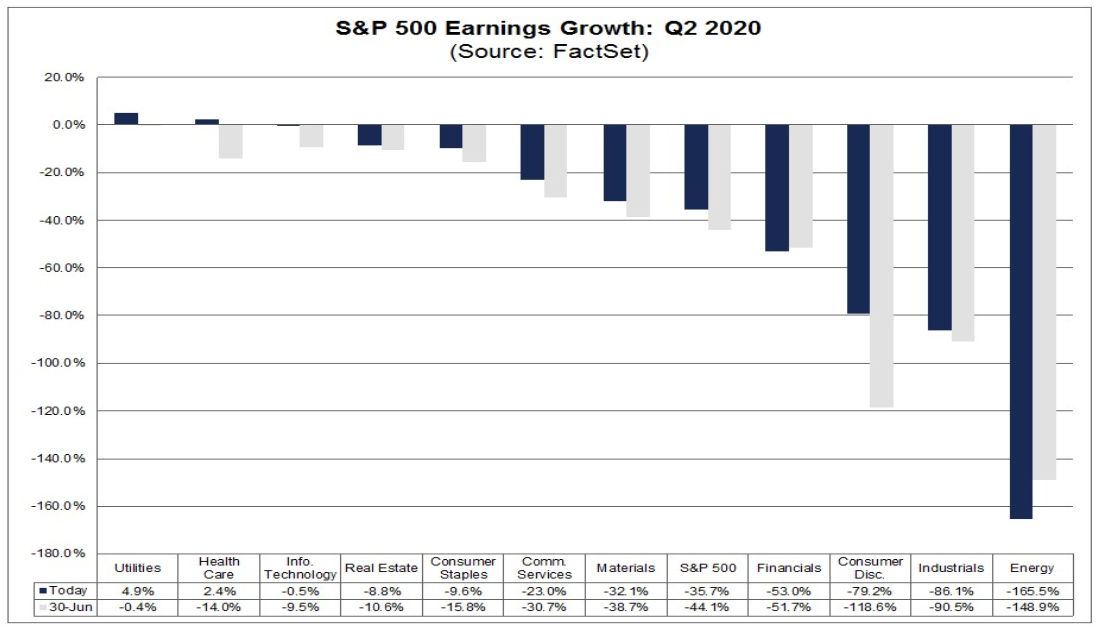 Like corporate earnings, the impact of the COVID-19 pandemic on US economic activity has been stark.  US gross domestic product (GDP) declined 33% in the second quarter, a significantly deeper quarterly decline that any witnessed during the financial crisis of 2008.  Not surprisingly, elements of the personal consumption expenditure component of GDP focused on consumer services such as transportation, recreation, and food services (restaurants) all declined sharply during the quarter.  Encouragingly, motor vehicles & parts was relatively resilient, advancing 5.5%.  US net exports also fell sharply. 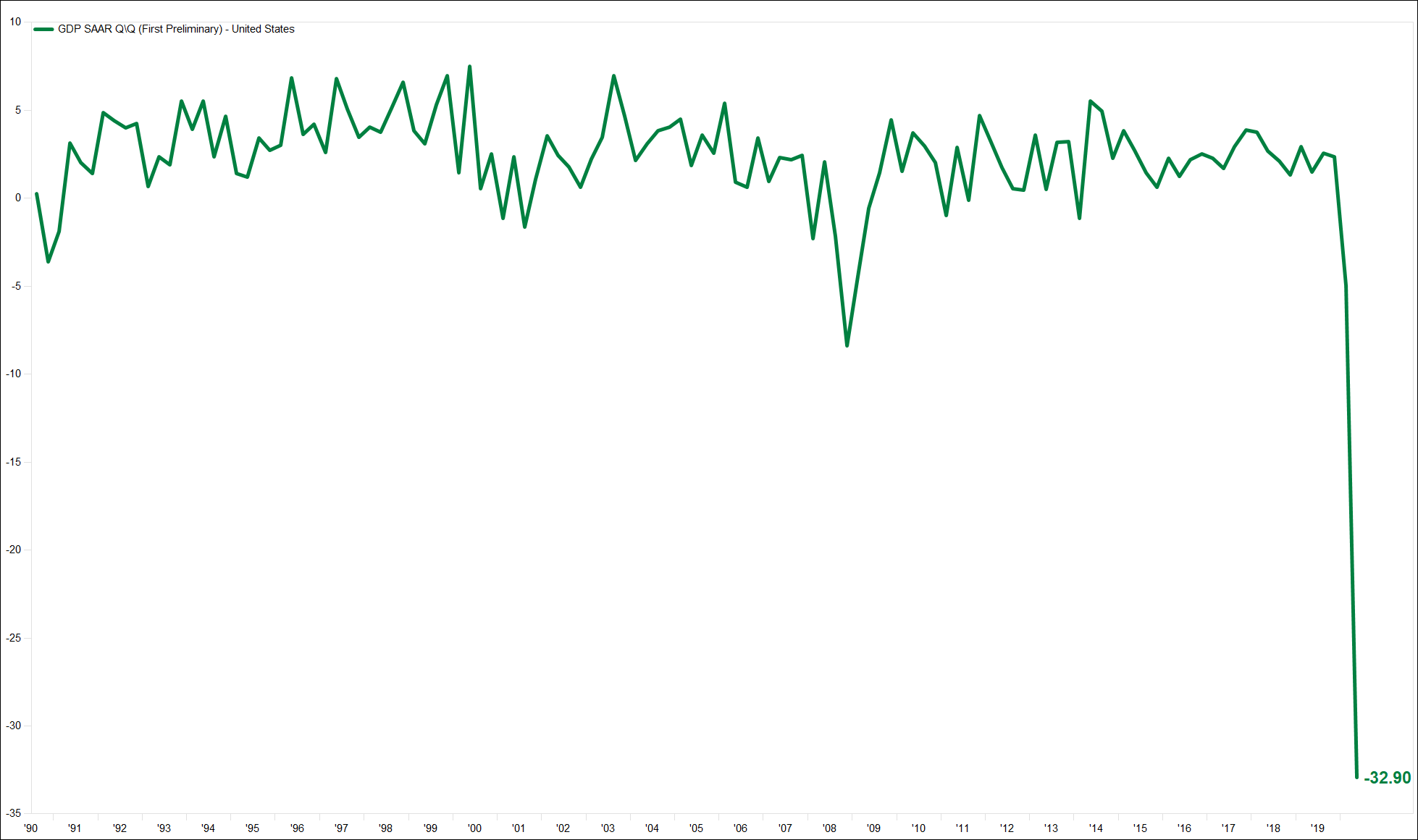 The US employment picture has shown signs of improvement, but is still very challenged.  Initial claims for unemployment benefits have been filed by more than one million Americans every week since March, and the weekly claims rose for the first time since March in late July.  Similarly, weekly claims for continuing unemployment benefits rose in late July for the first time since the early days of the pandemic’s impact on the US.  These are potentially troubling signs that the path toward an economic recovery may be slower than many have hoped for.  The US headline unemployment rate stands at 11.1% when it was last reported in early June, and even more Americans are underemployed or not counted in the total if they’ve stopped looking for work.  As of this writing in early August, Congress and the White House are still in negotiations for another round of fiscal stimulus, which is expected to provide additional direct payments to Americans.  This money could be a lifeline for many households as mortgage and credit delinquencies have been rising. 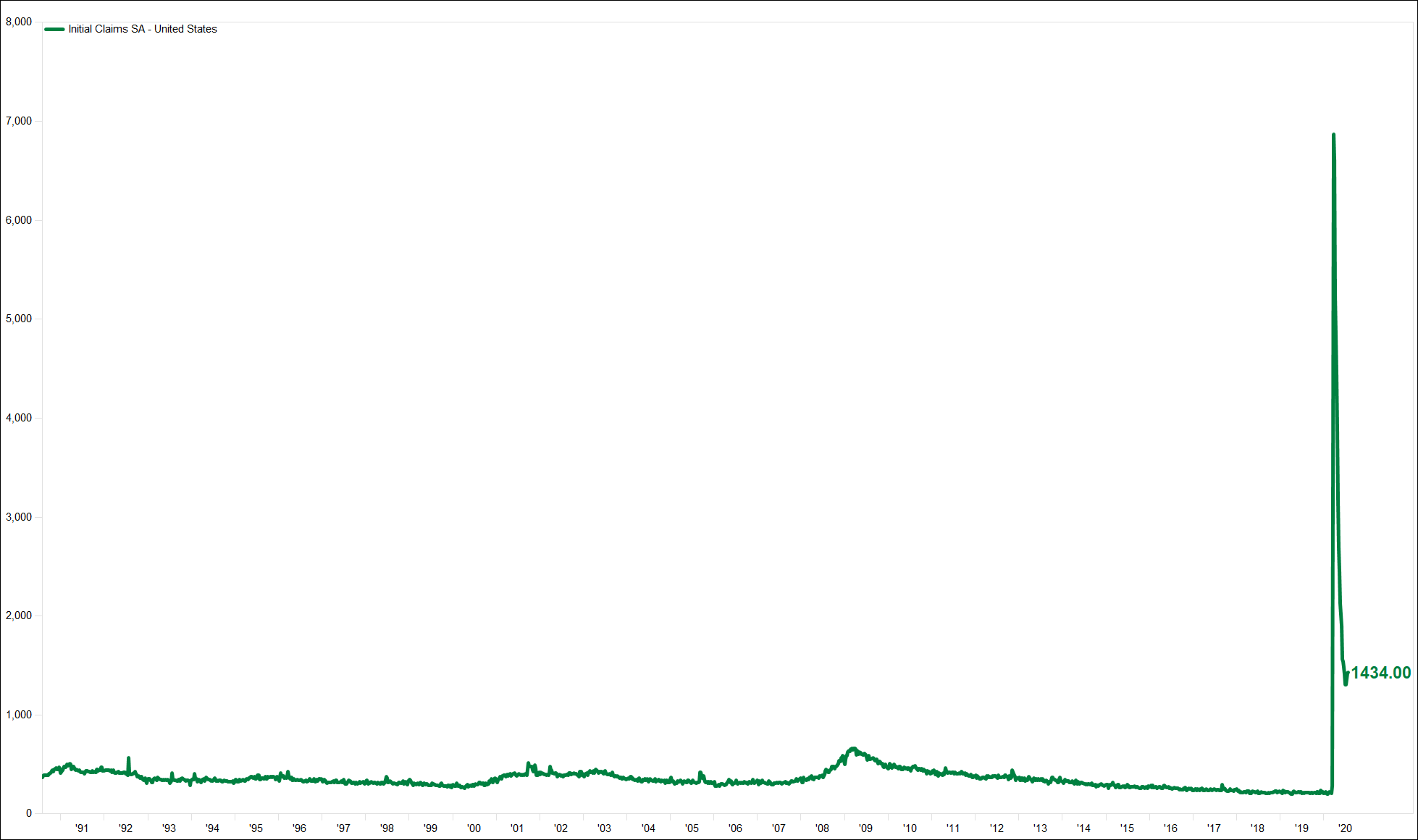 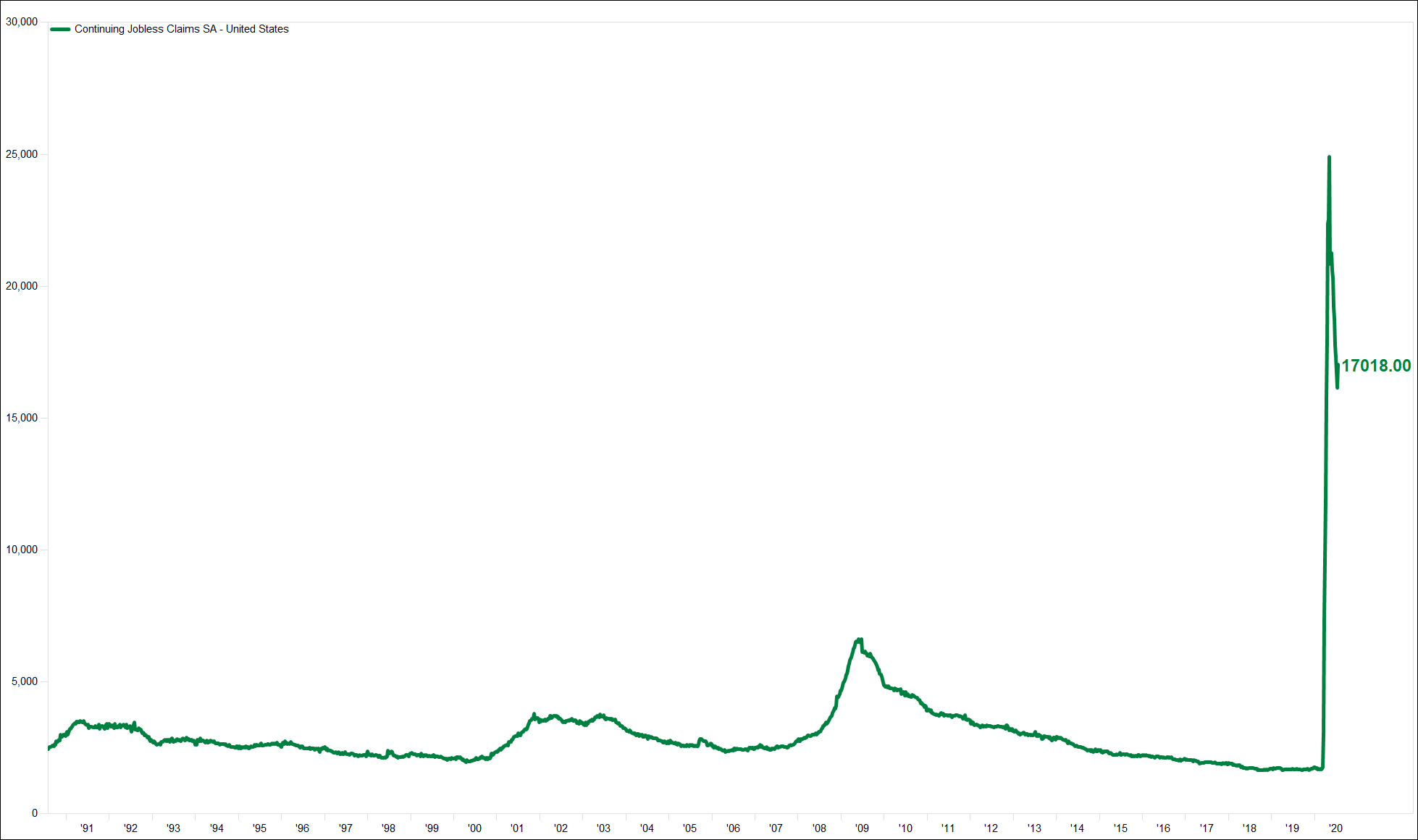 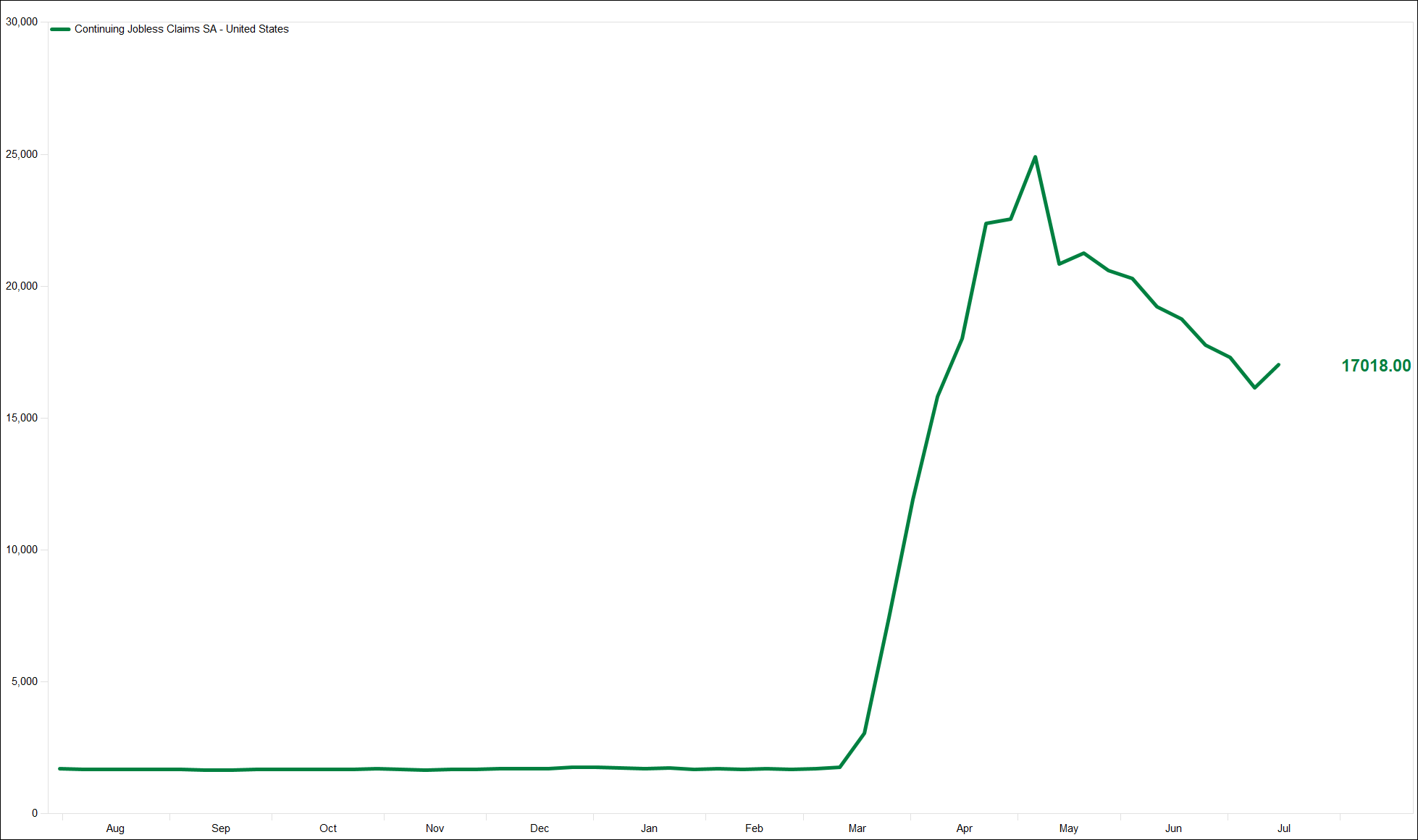 Following the 46% rally in the S&P 500 since the near-term lows of March 23, the index is now just 3% below the all-time highs set just a month before in mid-February.  The charts below highlight the price investors are willing to pay for the index’s expected earnings in the next two calendar years.  These charts imply that the index is over-extended, but we have also entered an unprecedented period of global fiscal and monetary stimulus providing direct cash support for economies and zero-interest rates and seemingly infinite liquidity for risk assets.  Market participants seem to be looking beyond 2020 earnings and are willing to pay a higher multiple for growth in the recovery years. 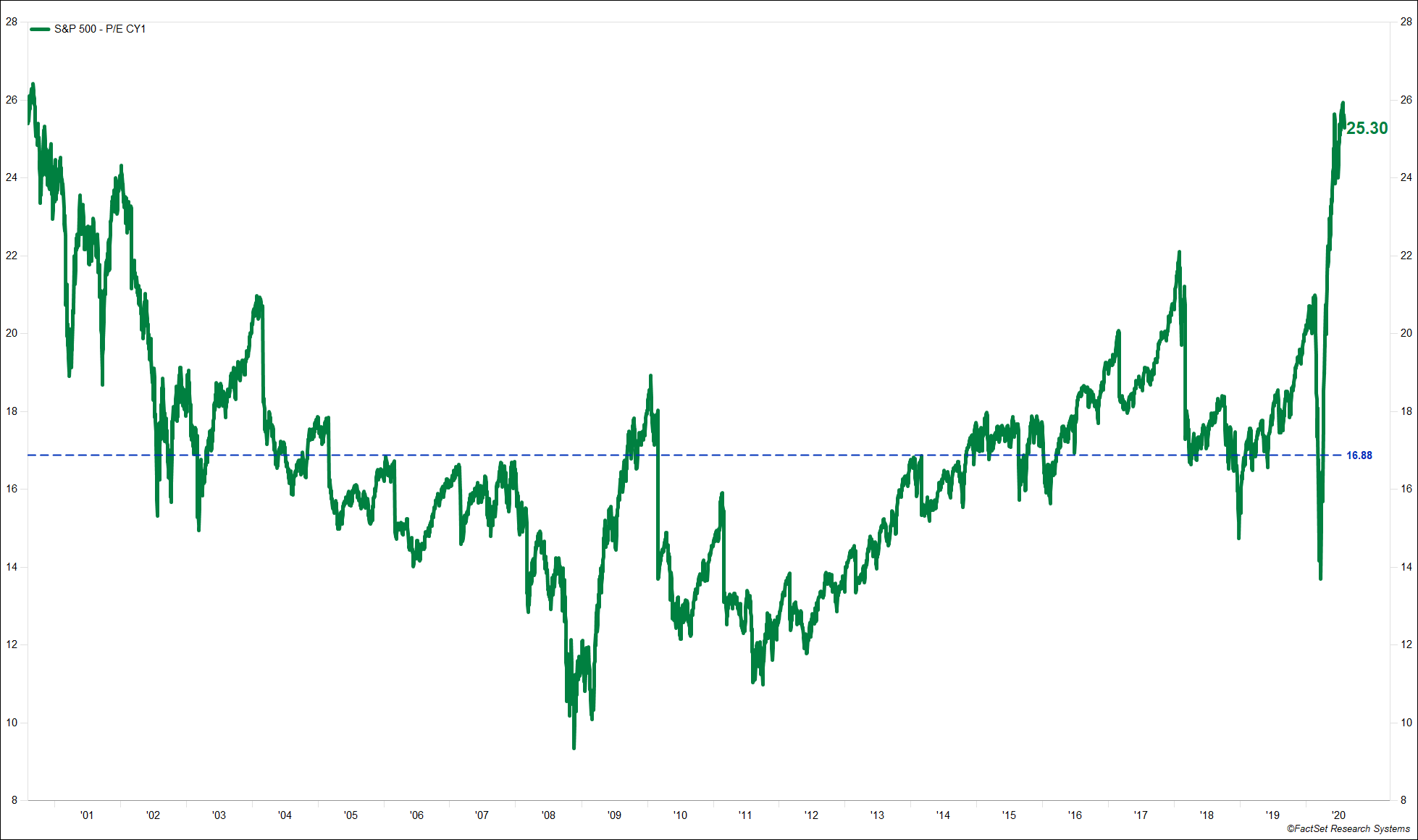